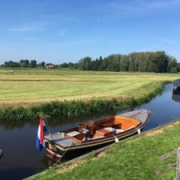 On 6 and 7 September, the Netherland’s Union of Water Boards hosted the annual meeting of the European Union of Water Management Associations (EUWMA) in Vinkeveen. The national umbrella organisations for local and regional water management in various Europeanstates share experiences and knowledge with each other.

This year, after the high water last summer, the theme of the meeting was the increasing weather extremes and the importance of climate adaptation measures.

After a delay of 12 months forced by the COVID pandemic, the occasion marked the passing of the EUWMA Presidency from ADA’s Chair, Robert Caudwell, to Hein Pieper, the Vice-President of the Dutch Union of Water Boards. In addition to the Netherlands and UK, delegations from
Belgium, France, Germany and Italy attended, and Spain and Portugal joined the meeting remotely.

The high water of the Meuse and extreme downpours across Europe this summer left a trail of destruction in many different countries. Crisis coordinator, Aart Los, spoke on behalf of the Dutch Union of Water Boards about the high water in Limburg. Increasing weather extremes,
with extreme torrential rains but also prolonged periods of drought, are putting great pressure on water management in Europe.

The members of EUWMA decided to join forces to take a stronger position with the Vinkeveen Declaration to put climate adaptation high on the agenda of national Governments and Brussels. “Due to climate change, weather patterns are changing drastically and the global water balance has disappeared,” said Hein Pieper. “The showers become more intensive every year and therefore more often have a devastating effect. Prolonged dry periods follow each other faster and faster. This means that we are forced to give water more space, but also to retain it longer where possible. This can have far-reaching consequences for spatial planning.”

During the year of the Dutch Presidency, EUWMA will also prioritise:

Both Spain and Portugal highlighted escalating energy costs for water irrigation and France reported success with the creation of a system of low-interest public loans for their Associations Syndicales although there remains an issue with loan guarantees. Belgium remains under political pressure to rationalise their multi-tiered system of drainage boards and also the effects of significant pollution of farmland as a result of the summer flooding.

Italy has challenged the reporting levels for River Basin Management Plans, identifying the need to drill down to smaller sub-units as they are finding that the water quality indicators are not suitable for smaller scale water bodies.

A precondition for good water management is structural financing. That is why Xavier Leflaive of the Organization for Economic Co-operation and Development (OECD) entered into a discussion with the EUWMA members about financing water management.

On the second day the group paid a field visit to the Vallei en Veluwe Water Board. Various climate adaptation projects were visited and delegates saw the successful creation of wet meadows from previously cultivated land, discussed the importance of routine river maintenance alongside natural flood management, and visited a farm to understand how the local water board is working with the agricultural sector on water retention and soils management in areas of higher drought risk.

The first day ended with a formal dinner to celebrate 25 years of the existence of EUWMA. Members were presented with a commemorative booklet prepared for the occasion by ADA, who were one of the founding members back in 1996.

The European Union of Water Management Associations (EUWMA) is the European delegation of national umbrella organisations for local and regional water management. The organisation consists of members from ten European states. EUWMA aims to share expertise in the field of water management in Europe. The challenges and solutions surrounding the implementation of European legislation are also important themes within EUWMA. 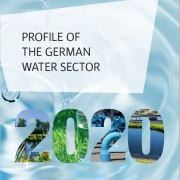 Hennef, 22. April 2021. With the Green Deal, the European Commission has provided the guidelines for a sustainable environmental policy in the European Union. In addition to the well-known climate goals, the Green Deal includes clear targets for an environment free of pollution. By 2050, soil and water also aim to be free of pollutants. Germany’s water sector has a clear focus on sustainability and contributes to the protection of soil and water. Drinking water is consistently offered in the best quality, and wastewater disposal is carried out in compliance with the highest standards – even under the currently aggravated conditions of the COVID19 pandemic. This high level of performance has been documented in the sector profile of the German water sector. The publication is now also available in English.

The sector profile highlights the variety of tasks of the drinking water supply and wastewater disposal in Germany, as well as their future challenges and was developed in consultation with the Association of German Cities (Deutscher Städtetag) and the German Association of Towns and Municipalities (Deutscher Städte- und Gemeindebund). The central goal of the German water sector is to secure the high-quality standards and – wherever possible and necessary – to improve them.

The supply of drinking water and the disposal of wastewater must work reliably in Germany. The importance of these services becomes particularly apparent in times of crisis. Security of supply has been and continues to be reliably ensured by our sector.

Against the background of manifold changes, all those involved are making considerable efforts to continue to operate successfully. Challenges include dealing with climatic and demographic change, and simultaneously with changing consumer habits and digitalisation. Additionally, the increasing contamination of drinking water resources by man-made pollutants, rising and often competing water demand in society, the refined detection and minimisation of the input of anthropogenic trace substances (for example pesticides and their degradation products) pose further challenges. As a result, conflicts of use with industry, agriculture, or the goals of energy policy challenge German water sector.

Drinking water suppliers and wastewater disposal companies confront these tasks. They advocate for flexible and adapted solutions on a local level through on social consensus. Increasingly, they make their business decisions in a political context. The common goal of politics and the water sector must be to overcome the challenges associated with maintaining the infrastructure and, at the same time, to anchor the sector’s efforts even more strongly in the public consciousness. High-quality water supply and wastewater disposal make an important contribution to our economic strength and the economic development of regions, in short: to our prosperity. This is precisely why we need a functioning water sector of high-quality.

The English version of the sector profile is available for download on the websites of the water sector associations.